At UK Connect we love to shout about our partners and share with our followers and readers exactly what they’re up to. This month it’s been a combination of mountain-climbing and visits from the bake-off. Read below to hear about news from UK’s construction giants CALA, Redrow and Taylor Wimpey, with their exciting news pieces from the last month!

Over 360 Taylor Wimpey employees from across the country have tackled a series of gruelling hiking and biking challenges at Snowdonia National Park. A total of 65 teams completed one of four routes of different levels through the mountains between Thursday 10th and Sunday 13th May as part of the annual Taylor Wimpey Challenge event.

Pete Redfern, Chief Executive of Taylor Wimpey, was one of the participants of this year’s challenge and says: “I am very proud of the dedication and commitment shown by so many of the TW team who completed one of the toughest Taylor Wimpey Challenges to date. It really is a huge achievement. Everyone is delighted with the fundraising total, which we hope will make a real difference to both the Youth Adventure Trust and many other local charities supported by our business units. I am already looking forward to seeing what we can achieve at next year’s challenge.” 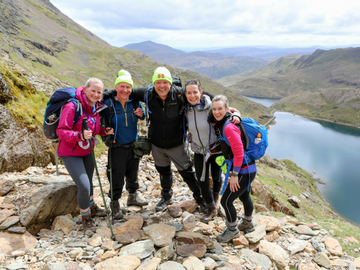 For the full story from Taylor Wimpey visit here.

National construction company and housebuilder, Redrow Homes, is inviting the public to join them for a day of baking demonstrations with Great British Bake Off favourites; Val Stones and Louise Williams.

The duo will be visiting the showhomes at Redrow’s Scholars’ Walk development in Hereford on Saturday 27th January, from 12-4pm, and will be there to whip up a selection of beautiful bakes, as well as pass on their top tips and share tasters with those who come to watch the demonstrations.

Scholars’ Walk is a picturesque development located just 16miles from the Welsh border. Today Hereford is a thriving city that blends outstanding history and heritage with the very best of modern living. A multi-million pound, 15-year regeneration project is well underway, with a new £90m shopping and leisure centre already open in the city centre.

The showhomes at Scholars’ Walk, which visitors will be able to look round in between the demonstrations, are Redrow’s 3-bedroom Ludlow and 4-bedroom Cambridge. Both showhomes whilst spacious in size, retain a warm and cosy feel as part of the housebuilder’s luxurious Heritage collection.

Kate Lacey, Area Sales Manager at Redrow Homes South Wales, said: “It is always brilliant to be able to host these kinds of events alongside our showhome openings. We have previously had Louise and Val visit a few of the developments and it proved to be a huge success, so we’re all really excited to see what the pair have planned – it’s definitely not one to be missed!”The Sales Office at Scholar’s Walk is open Tuesday-Sunday, 10am-5.30pm and Mondays, 11am-5.30pm. For further information please call 01432 623886 or visit www.redrow.co.uk.

The board of CALA Homes has announced that Alan Brown, the construction company’s Chief Executive, has informed the board of his intention to retire from the company.  Alan successfully led the Group through the wider market turndown and oversaw the sales process from Lloyds Banking Group that secured the backing of L&G and Patron Capital in 2013 before delivering the acquisition and successful integration of Banner Homes in 2013. More recently, Alan led the acquisition of the Group by L&G which was announced in March 2018.

“CALA has benefited greatly from Alan’s leadership over the last nine years as Chief Executive and we shall miss him.  The Group is much stronger and more resilient as a result of his direction and the Board is confident of achieving continued and sustainable profitable growth well into future.”

“This was not an easy decision.  I’ve spent nearly my entire career at CALA, working with a talented group of people to build the great business that it is today.”

“When I took over as CEO, the company had significant challenges and as a team we’ve worked extremely hard to overcome those challenges and build a large and very successful business that now enjoys the long-term support of one of the UK’s blue chip companies.”

”I have enjoyed working at CALA immensely and I would like to thank all my colleagues for their fantastic support. The Group is in great shape with exciting growth opportunities and now is the right time for me to hand over the reins to a successor to lead CALA into the next stage of its development.”

“I will now be taking a short time out from corporate life in order to think about the sorts of roles and activities I wish to pursue in the next stage of my career.”

For the full news story from CALA follow the link here.

For further information on the WiFi solution being used by top UK house-builders take a look at SITE Connect our construction site broadband service.